At this time of year gardeners start to plant seeds in the hope of seeing them bloom by springtime. If you’re getting ready to plant your flowerbeds, pots or windowbox; here are a few brilliant gardening hacks that can boost your gardening efforts without costing you a penny. END_OF_DOCUMENT_TOKEN_TO_BE_REPLACED

If you are new to vegetable growing, you may well be wondering what you can safely plant or sow in March. What you can plant in March (or sow, for that matter) depends a great deal on where you intend to sow/plant your vegetables. To make things a little easier, we have split what to plant in March into groups based on location for you.

If you are planning on growing your veggies in balcony planters or window boxes, you can now start sowing:

END_OF_DOCUMENT_TOKEN_TO_BE_REPLACED

Enter the new year with new ideas for your garden. Ensure you stand out and stay in style by planning your horticultural look with inspiration from our top upcoming gardening trends for 2017. Here’s everything you need to know for the year ahead: END_OF_DOCUMENT_TOKEN_TO_BE_REPLACED

Winter has hit hard, with temperatures plummeting throughout the country and snow coating the gardens of many homes. You may have put away the gardening tools for the year, but there’s still plenty of beauty to be enjoyed in nature at this time of year, and adding a bit of heat can help you stretch out those al fresco evenings a little longer.

These are our favourite devices for delivering some extra warmth outdoors. END_OF_DOCUMENT_TOKEN_TO_BE_REPLACED

For tulip lovers, this is the most important time of the year. Though they won’t flower until spring, now is the time to start planting. But with over 150 species and over 3000 varieties, how can you decide which tulips are right for your garden? END_OF_DOCUMENT_TOKEN_TO_BE_REPLACED 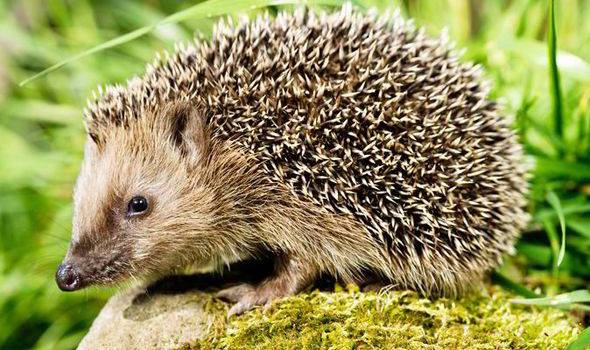 The number of hedgehogs spotted in English gardens has been steadily declining over the last few years. A study undertaken in 2015 by the British Hedgehog Preservation Society shows that the urban hedgehog population has declined by a third since 2000, and the countryside population by up to three quarters. END_OF_DOCUMENT_TOKEN_TO_BE_REPLACED

You may have come across an article in the past week featuring results from a survey about young people’s attitudes towards gardening. The enlightening data showed that the nation’s youth’s most loved gardening program was “Gardener’s World”, which stormed ahead of the timeless classic “Can’t Remember The Name” in second place. And, only 7% had been encouraged to seek a career in horticulture, even though 79% had experience growing a plant!

One respondent – Female, 14 (probably not her real name) – said “It’s kind of stereotypically for older people so I would like it to be more inviting to younger people.”

Alright then young people. Let’s do this thing. END_OF_DOCUMENT_TOKEN_TO_BE_REPLACED

It’s the end of Summer…

It is now officially Autumn, and that means your garden is about to go through more changes than the Great British Bake Off. Here are the top things you need to do for your garden to prepare it for the cold months ahead. END_OF_DOCUMENT_TOKEN_TO_BE_REPLACED

OK, so your hydrangeas are wilting and next door’s dog has destroyed your vegetable garden. At least you’re not facing any of these problems with your garden:

Two separate households in the South of England were the victims of the same bizarre horticultural crime at the end of last month, when their garden hedges were dug up and stolen overnight. Anthony and Daphne Hawley from Copthorne, West Sussex woke up on the 25th August to discover their 30ft laurel hedge had completely vanished from their garden.

“We had about 25 laurels at the front of our garden…about six foot high. We woke up and everything was just gone. It must have happened overnight.”
“You can see quite clearly where they have been dug up and you can also see tyre tracks on the road outside. Whoever it was must have needed a large truck, because 25 laurels certainly aren’t small things.”

The Hawley’s had CCTV cameras, but failed to get any footage of the crime in action. The loss of their laurels came only 5 days after another case in Kent where Peter and Julie Vine’s 127 shrubs, that made up a border around their front garden to keep out traffic noise from the A227, were similarly stolen in the middle of the night.

“You’ve got to pull them out, load them on to the back of something, and I have to ask what is the point of doing something like that?”

The police are looking in to each case, but are so far stumped.

Pensioner prisoned for growing a garden

A Preston pensioner has been dealt a six month suspended prison sentence for planting a community garden without permission in front of his block of flats. Jam Imani Rad – a retired teacher – spent £5000 on creating an elaborate garden space complete with trees, statues, trellises and water features on the communal land, but did not get approval from the Community Gateway Housing Association.

After being warned that his garden was in violation of his tenancy agreement, and was a health and safety risk in a communal area, the Mr Rad was taken to court, where a judge sided with the CGA.

Despite a petition featuring over 6000 signatures, the garden is currently in the process of being dismantled Mr Rad is now facing eviction as well as a six month prison sentence.

Digging up a garden often unearths some mysterious relics of recent history: the shrapnel of old tapes, undeveloped rolls of film from a disposable camera, the bones of once beloved pets. But fortunately very few gardeners discover a relic as dangerous as the one found by residents of a South London home on the 22nd August. A live grenade was uncovered amongst the flowerbeds, buried deep under the roots of the plants, waiting for a misplaced strike from a fork or spade to blast a crater in the garden.

Fortunately the grenade didn’t go off when it was revealed by the terror-stricken gardener, who immediately called the police to deal with it. A specialist bomb disposal team removed the device and set it off in a controlled explosion at a safe location.

Yesterday #TeamD dealt with this little surprise found on Alderbrook Rd, SW12. It was still live but safely removed. pic.twitter.com/JoezH2NnW3 Our GBBO competition is now closed, and we’re pleased to announce that it gave us a lot of food for thought in picking our winners. We really saw some absolute masterpieces from our entrants, as well as some things which we wish we could forget, so we think the competition was a resounding success! As much as we had plenty of works of art and god-awful disasters submitted, there can only be a handful of winners!

We’ve decided to honour a runner-up for each of the two categories, for a creation that didn’t quite make the cut, but certainly deserves to be mentioned here. Our first runner-up is our runner-up of The Best category, Rachel Curley! One of my best bakes, a garden themed birthday cake for my granddad x

And to completely ruin your appetite for that deliciously indulgent chocolate cake, here’s our runner-up of The Worst category, Elizabeth Gurney! “So I tried to bake individual chocolate pretzels… everyone laughed when I brought it through! Yeah doesn’t look that appealing… #fail”

Both of our runners-up have won themselves a £10 voucher to spend at G&HD!

Now for the winners of our competition, who have both won the grand prize of a £50 voucher for G&HD! Firstly, the winner of The Worst, with a truly horrifying rainbow cake, is Sharon Curran! I’d been telling my husband I really wanted a rainbow cake for my birthday and imagine my face when he surprised me with this. I’m not really sure how I can describe it. It was certainly very moist! I did give him some marks for nice decoration but the cake itself needed a bit of work.

Needless to say nobody wanted to try a slice of it.

Yeah, I wouldn’t try a slice, either.

Finally, the Grand Prize winner of The Best category is Charlie Brunton! I made this for my partners birthday this year! Chocolate heaven!

We’d like to thank all of our competition entrants, and we hope you’ll continue to enter our great competitions here on Love Your Garden. For all the latest updates from Gardens & Homes Direct, including special offers, be sure to follow us on Facebook, Twitter, Pinterest, Instagram and Google+, and sign up for e-mail updates using the box at the top of this page. Cheers!